What you will find in the new build 03? 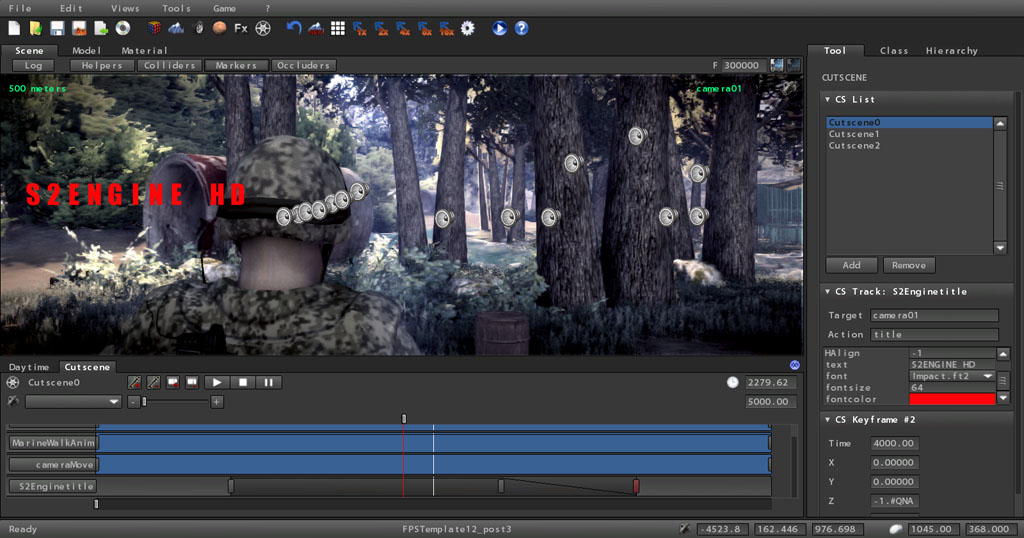 What you will find in the new build 03?

In September I’m working on the new 1.03.00 version.
The key feature I’m working on is the cutscene tool. This tool gives you the possibility to create realtime game cinematic cutscenes using the engine rendering power.

With the tool you can control the time changing behaviour of variety of parameters using interpolators:

Each of these functions can be controller inside a single track, and each of them has its own parameters. Every cutscene can contains as many tracks as you want.
The beauty of my approach is that many other new functions can be added (using C++ SDK) deriving them from a base class and without changing editor or engine pipeline.

In the Scene viewport I’ve introduced the possibility to change the active camera in order to test the cutscene from the preferred camera point of view during the editing.

I’ve also introduced an horizontal panel (that can be closed when needed) wihich contains, as tabs, the cutscene track editor and the daytime timeline (that in the previous version was drawed inside the scene viewport as a transparent panel). This organization has improved the overall look of the editor resulting much more professional.

Another small improvement regards the rendering: water caustics. In the current version caustics are generated by scrolling 3 textures at different velocity and blending them, the new version uses only 1 animated texture: the result is much more realistic (animation is better than scrolling 🙂 ) and faster (1 texture is just better than 3 🙂 ).

The new version 1.03.00 is almost to be released (later this month). A couple of new things are being added before the final releasing and also a video tutorial about cutscenes editing will be uploaded.
Don’t forget to subscribe Profenix Studio Channel!!