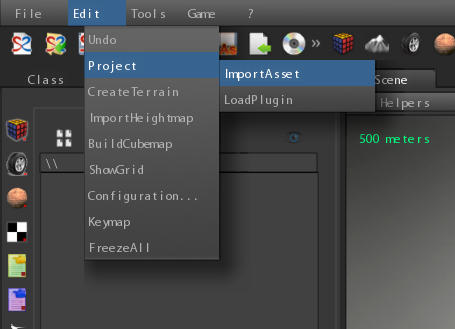 In this tutorial I’ll show how to import a scene made with old S2ENGINE HD 1.03.00 version inside a project created with S2ENGINE HD 1.4.0.

How to import into the project the scene you created with previous 1.03.00 engine version?

Pratically you have first to create (we say “publish“) an asset of the scene (a folder containing all the scene resources) and then import it into the project.

Let’s see how to do this in detail.

Select the scene browser inside the project tool as showed into the following pitcure:

then click right mouse button on the icon of the scene you want to publish: a popup menu will appear (see the picture below).

Click on “Publish…“. A file dialog will appear: choose a folder inside to put the published scene, insert the name of the scene asset to create (and press ‘enter’) as showed into the image.

Now click on “Publish” in the file dialog: the engine will create a new folder (in this case named “NewScene” and it will put all scene resources inside it.

Well, click on the the Edit menu and select Project->Import Asset (see the picture below).

A file dialog will appear: choose the folder of your scene.

NOTE than when you import assets you can choose a file BUT ALSO an entire folder. In our case we have to choose the an entire folder so click on the scene folder, as showed in the next picture, in order to see want is inside and then click on Open.

Voilà, the project browser will fill with all scene resources, the scene is imported.

That’s all for now guys.